Friday, I worked until midnight, which was perfect, because right when I got it, Julia and her roommate had just pulled into Provo and they were able to pick me up, so I didn't have to wake up my roommates.
As we were driving and deciding what to do, Julia's boyfriend suggested that we go to the hot springs. Like, right then. So, he dropped us off at my apartment around 12:30, and we got ready.
At 1 AM we finally headed on our way. It's about a 45 minute drive. So when we got there it was almost 2. We started the hike, and it was freezing. Finally we got to the hot springs around 3.


We stayed in there until 4:30. after several attempts to get out, we finally did. But it was freezing. And we all smelled like sulfur, and it was also really late.
We went to McDonald's after we got back into the city. We got home at 6:10. After we were all showered and relatively warmer, we went to bed.
Saturday was General Conference, so at 9:50 we woke up at watched conference. It was quite good. One of my roommates went out and bought tons of candy. Later I went out and did the same. By the end of the day, our table looked like this
Sunday was uneventful, besides Conference.
At 7. Maraika, her boyfriend, and her brother came over. The four of us went hiking. It was really fun. Her brother is going to New Zealand on his mission in a week exactly.
He's pretty cool. I'll probably write him.

Monday was Canadian thanksgiving. And I had a wonderful dinner... Okay. No. I didn't. This was what it was.

Not Thanksgiving-y at all. But, since I really do have the best roommates in the world, last night (9/10/12 (October, 9)) I hopped into bed at 1 Am. And was surprised with a box in my bed. 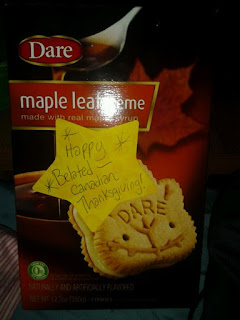 Needless to say. Life is really good right now. I am quite happy.
Written by Josie Louise on Wednesday, October 10, 2012 2 comments:

I just read an article about a suicide bomber killing people. And it said 14 people were killed, including 3 americans. Big freaking deal. 14 lives were lost. FOURTEEN. Then you just go on to talk about those 3 people and poor America? Were the others less important because they're not American? Out makes me sad that everything is based on nationality, race, sexual preference, gender, and religion.
Have we forgotten that people are people? Everyone is important and amazing and beautiful.

Written by Josie Louise on Monday, October 01, 2012 No comments: